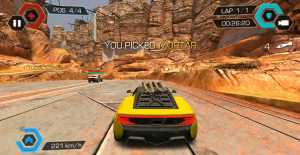 Everybody loves a good vehicular combat game. Driving a fast car equipped with machine guns and rocket launchers is a fantasy that can unfortunately never come true, so we make the most of the games that provide that experience.

If you’re on the lookout for such games, then you’ll find plenty you can play, for free, on Drifted.com. This list contains what we consider to be the overall top 5 in the entire category, so take a look and try these out!

This first of the Car Games in this list doesn’t have cars with weapons per se, rather, the cars ARE the weapons. Car Crash Simulator Royale is a destruction derby simulator that puts you in the driver’s seat of one of several cars and asks you to be as reckless as possible.

Crash, smash, and flatten the competition and attempt to be the last car standing. The game has a grounded yet fun physics that makes all of the destruction believable. If cars aren’t that exciting to you, there are also heavy vehicles like tanks and trucks to make use of.

As its name suggests, Derby Crash 2 is another destruction derby-style game. This time, you’re getting much better graphics than Car Crash Simulator Royale and an even more realistic physics system. Also, Derby Crash 2 has highly detailed damage models, which can actually affect how your car drives.

Other advantages over the previous game on this list include a terrain editor to manipulate the arena and a more diverse selection of vehicles to choose from. There is also a multiplayer feature that allows two players to play with one computer.

READ MORE:  5 Things You Probably Didn't Know You Could Do on iMessage

If you threw Mario Kart, Twisted Metal, and Fortnite into a pot and mixed them all up, you would get Kart Wars 2. This cartoony car combat game throws players all over the world into a single map and tasks them with competing in vicious matches of capture the flag.

Each 8-player lobby quickly devolves into complete mayhem when the bullets and rockets start flying. You can destroy your opponents to prevent them from taking your flag, but be careful. They have the same weapons you do, so don’t let anyone sneak up on you!

READ MORE:  How to Draw Manga?

In a world where criminals refuse to respect the law, the only way to stop them is to completely smash their cars. This is the concept behind Police Pursuit 2, a police-focused, derby-style game.

Players will patrol the streets in a police cruiser, take side missions, and chase down criminals in their cars until they can run them off the road. It might not look like justice on the outside, but this is how Police Pursuit 2 deals out its punishments.

This final game is CarFight.io. It is an isometric car combat game where the goal is to push your opponents off of a precariously high stage/arena. Like other “.io” games, each car you eliminate will result in your own car becoming bigger and stronger.

A bigger and stronger car means it will be easier to dominate your opponents, but be careful, it’s all over if you drive off of the stage accidentally!

These are just a few of the combat Car Games available on Drifted.com. If you enjoyed these, please check out the other categories on the site such as Multiplayer Games and Simulator Games.