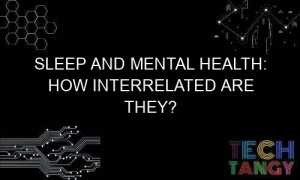 Sleep And Mental Health: How Interrelated Are They?

The effectiveness of sleep interventions will depend on the type of sleep intervention and the variables that affect its effectiveness. Research on this topic must be systematically conducted to draw valid conclusions. For this reason, this project aims to provide reliable evidence on the relationship between sleep and mental health. The project will use the GRADE system to evaluate the strength of the evidence base.

A bidirectional relationship between sleep and mental health is becoming increasingly apparent. Although sleep can be the underlying cause of or symptom of mental health problems, it is often the consequence. One aspect of sleep that is connected to mental health is obstructive sleep apnea. This disorder causes short, pauses in breathing while a person sleeps, reducing the amount of oxygen in the body and increasing the risk of severe mental distress.

READ MORE:  How Do You Make Organic Formula?

Insomnia can be caused by underlying mental illnesses. Those with depression or anxiety often experience insomnia. The relationship between mental illnesses and sleep disorders is bidirectional, and recognizing both can be beneficial. Symptoms of a mental illness can help your doctor diagnose your insomnia. For example, waking up too early and not feeling rested during the day can be signs of post-traumatic stress disorder. Similarly, recurring nightmares may be signs of post-traumatic stress disorder.

Following a routine before bed can help you achieve the optimal amount of sleep. This will send signals to your brain that it is time to wind down and get ready for sleep. It can be anything from yoga to regular bedtime tasks. You should also avoid bright lights as much as possible before you go to sleep. It also helps to write down to-do lists or worries before bedtime. By doing this, you will ensure that you are well-rested for a more productive day.

READ MORE:  Why Do You Need to Visit a Podiatrist?

The results from a recent study suggest that aerobic exercise improves sleep for proper mental health. Researchers compared participants in the aerobic exercise group with those in the control group on the objective measures of sleep. The participants in both groups experienced improvements in their sleep quality, although there was no significant difference in the number of hours of sleep lost. However, the effects of aerobic exercise on sleep were not consistent across the two groups. In addition, the exercise group reported lower levels of depressive symptoms compared to the control group.

Developing a relaxing bedtime ritual is vital to improving your sleep and promoting proper mental health. Sleeping well with minimal screen time is essential to signaling your brain to unwind and let go of stress. To make it easier, practice a relaxation technique such as yoga or meditation before bed. If you find it difficult to wind down at night, you can also dim the lights and play soft music.

READ MORE:  What Do Your Serum Testosterone Levels Mean for Your Health?

Light pollution from smartphones, tablets, and televisions is a problem, even if they’re only used during the day. Blue light can disrupt the natural rise of melatonin, the hormone responsible for regulating sleep. Using technology at least 1.5 hours before bedtime delays the body’s natural clock by a half hour. It has also been linked to feeling less sleepy and worse performance on mental tests, as people who use technology during their bedtime have lower levels of the hormone. Researchers are hopeful that tablet manufacturers will get creative with their devices and develop ways to make them more “circadian-friendly.” Until then, you’ll have to take it easy and turn off your devices before bed. Or, you can always switch back to the good old-fashioned book.

Getting in sync with your body’s natural sleep-wake cycle

Circadian rhythm refers to the body’s internal clock that regulates its sleep-wake cycle and helps you get up early. When it is off, the body can’t function properly, resulting in a host of physical and mental problems. A healthy active lifestyle and regular sleep are key to maintaining your body’s natural rhythm. But there are also certain things you can do to ensure proper sleep for optimal mental health.

Researchers have linked late-night television viewing to poorer sleep quality, insomnia, and nightmares. Although this is true for daytime viewing as well, nighttime viewing is thought to disrupt our internal clock and interfere with the production of melatonin and circadian rhythm. The results of a recent study of 200 infants in Thailand show that watching television after 7 pm can cut total nighttime sleep by 28 minutes.

The relationship between sleep and mental health is complex, and the causes and symptoms of both conditions are often not well understood. Recent studies have focused on individuals who suffer from specific mental health conditions. These studies, however, have shown that poor sleep can lead to a range of mental health problems. Insomnia is a common cause of depression. However, sleep deprivation is linked to many different conditions, including depression and neurodevelopmental disorders. A recent study concluded that nearly 70% of people with depression have some form of insomnia or other sleep disorders.

Insomnia precedes many mental illnesses, including bipolar disorder, anxiety disorders, depression, and schizophrenia. It’s also a risk factor for psychosis, and participants with poor sleep quality were more likely to suffer from such disorders as schizophrenia. Some researchers have suggested that there is a bidirectional relationship between sleep and mental health. Researchers are unsure what causes poor sleep, but it’s clear that both factors are crucial.

READ MORE:  The impact of COVID-19 on rates of eating disorders

Aerobic exercise, Avoiding bright screens, Avoiding late-night television, Bedtime sleep meditation, Getting in sync with your body's natural sleep-wake cycle, helps you get up early, how interrelated are they, sleep and mental health, sleep and mental health: how interrelated are they?, The Final Verdict, Tips To Improve Sleep For Proper Mental Health
{"email":"Email address invalid","url":"Website address invalid","required":"Required field missing"}