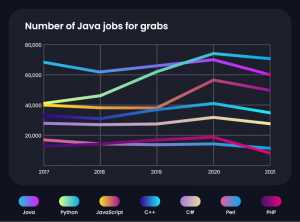 Java creator James Gosling wanted to create a programming language similar to C but more simple to use and implement. The goal was to come up with a language that, once it’s used to write a program, can be run everywhere. Together with C and Python, Java creates a “holy trinity” in programming and software development from scratch.

Today developers use many frameworks with implemented code, patterns, and functions. Still, we can’t deny these languages’ importance, especially Java, for what we know today as modern web and app development. And indeed, someone will always be willing to hire a java developer for serious projects they work on. That means the language may be “ancient,” but it’s still widely used in the IT sector.

So, is it an excellent beginning of your career? It can be if you start from the basics and then progress until you master Java and eventually move to something more challenging in the future.

Why Is Java Still Relevant Today?

Java is the most used programming language for software tools, web apps, Android apps, and software development environments like Eclipse and NetBeans.

It features many tools that ease the developer’s job, like an integrated editor, debuggers, and automated processes. That makes Java pretty user-friendly, no matter if you first learn Core Java or you directly go to advanced Java.

Any developer can still use Java as a strong base for their future growth as computer scientists and IT professionals.

You Can Always Upgrade Your Knowledge in Java

Programming languages are meant to be upgraded over time. So, there is always something new and exciting to learn and use while coding.

In the beginning, you may not know what is a method in Java, but you will get there as soon as you get used to the process.

Java has an enormous online community, and they all contribute to further upgrades and development. If you join some themed forum or online community, you can always get some help when working on a project or even while you study the language.

READ MORE:  What To Look For In SEO Copywriters

It’s always better to ask them specific questions, like what is encapsulation in Java or something like that, and get the straight answers instead of working it out yourself. Developers communities are known to help every beginner or even the experienced programmers when they have some issue while they work on a project.

Additionally, you can always use the free learning resources to upgrade your knowledge and get better at Java programming.

Great Reasons to Embrace a Career in Java

Java offers a unique chance to understand how programming works and how to get used to object-oriented programming syntax. Here are even more reasons to learn Java in 2022:

READ MORE:  Why Improving Your SEO is Important

Beginners often learn C or C++ first, so they can understand the basics. The good thing is that Java uses similar syntax and commands, but it’s more precise, readable, and offers better memory management tools. Since C++ is also an object-oriented language, moving from it to Java will be smooth, without some huge issues during the process.

It’s also easy to learn because the syntax is based on English language rules. Students can easily understand how it works, and as we said, there are countless resources that can help during the process.

2. Chance for a High Salary

READ MORE:  How to Do My Science Homework Fast

When taken globally, the average Java developer salary is between $47,000 and $107,000 per year. But it all depends on your current location, market demand, and your professional level of knowledge and skills.

Java is widely used for web, mobile, and desktop applications. It features dynamic coding and offers many security aspects.

You need to convert the source code to byte code, so the program can be compiled using Java Virtual Machine.

And, of course, it’s free of cost for learning and practicing and relatively cheap for commercial purposes.

You need a development tool or environment to write the code, compile and run it to test. You can choose between Eclipse, NetBeans, IntelliJ, Android Studio, and many others.

READ MORE:  Google Maps Ranking Factors & How You Can Adapt?

In the end, we hope that now you know why you should consider a career as a Java developer and get many chances to get hired by the most prominent IT companies. You can choose to be a dedicated computer scientist or offer your freelance services too.

It’s essential to learn the basics but also to be open to growing in the future by learning some of the related programming languages and getting used to modern frameworks for software app development.

1. Beginner-friendly Language, 2. Chance for a High Salary, 3. It's Versatile, 4. Many Available Development Tools, and Platform Independent, Free of Cost, Great Reasons to Embrace a Career in Java, reasons to learn java, reasons to learn java in 2022, Why Is Java Still Relevant Today?, You Can Always Upgrade Your Knowledge in Java
{"email":"Email address invalid","url":"Website address invalid","required":"Required field missing"}