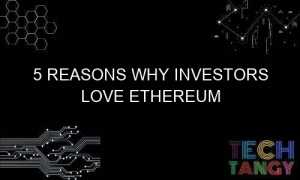 You might not have heard of Ethereum. This digital currency is what’s called a “smart-contracting platform”. And for investors, that means one thing: profit. With the likes of Bitcoin losing value, and other digital currencies too unpredictable to support a long-term investment, it looks like Ethereum could be the answer to their prayers.

Here are 5 reasons why Ethereum could be the next big thing for investors:

Ethereum has its own native programming language, called Solidarity. It also features smart contracts, which essentially act as an escrow for a transaction. This means that transactions are only completed when certain conditions are met. For instance, a supplier of goods or services will not be paid until the buyer confirms that the goods or services were delivered satisfactorily.

READ MORE:  Getting Started in the World of Cryptocurrency Brokerages

Ethereum has seen quite a lot of volatility in its price over the past year. But, according to a recent article on NASDAQ.com, that doesn’t mean it’s a bad investment. In fact, it might be just the opposite.

“When volatility is high, investors like to get involved in these payment networks because they see it as a great way to get some percentage returns on their money,” said Alex Sunnarborg, founding partner of Tetras capital. A payment network is exactly what Ethereum is — a network that allows investors and consumers to build applications on top of the blockchain technology and pay each other directly through smart contracts.

READ MORE:  How To Choose The Best Golf Cart For Your Needs?

Ethereum’s decentralised, open-source nature makes it a boon for investors. For example, in many ways, Ethereum is very similar to Bitcoin. But unlike Bitcoin, Ethereum allows developers to build applications and get paid directly from the network. The network is also self-regulating, not requiring third parties such as governments or banks to mediate transactions as Bitcoin does.

Ethereum has a growing community made up of software programmers who contribute code to the network, paying them in Ethereum for doing so. It also has developers who are building applications on top of the network.

Of course, the community is not without its hiccups. There is a debate raging in the Ethereum community over whether or not to implement certain changes to the code. Some believe that implementing these changes will make it easier to mine Ethereum and take away some of its value; others believe they will raise the profile of Ethereum and make it easier for commercial applications to be built on top of it.

And if that doesn’t convince you, look at it this way — Ethereum has been gaining in value over the past month (since June), whereas Bitcoin has been falling.

Ethereum’s unique value proposition makes it a great investment. Because it is open-source and allows businesses to build applications on top of the blockchain, it’s got a lot of potential. According to Tetras Capital, Ethereum could very well be the “next Bitcoin”. If you want to purchase ETH, you can start trading at cointree.com